Constellations of the Zodiac Band

It is quite true that there are more than 12 constellations, or star groups, that fall along the area of the sky astrologers call the ZODIAC BAND. The star group Ophiuchus – sometimes referred to as the 13th zodiac sign – is one of them. The formal term for this sector of the heavens is the ECLIPTIC, which is an imaginary circle that traces the Sun’s apparent year-long journey around the Earth.

Astrology has turned what is the Earth’s elliptical orbit around the Sun into a perfect circle of 360° and divided it into 12 equal sections of 30° each, naming it “The Zodiac”. This is not a scientific concept as no such thing actually exists in 3-D reality. It is an artistic, philosophical way of observing our experience as multidimensional beings living physical lives here on Planet Earth.

Reoccurring patterns based on divisions of the 360 circle are a constant theme in astrology. As western astrologers we remain loyal to the stylised version of the heavens around Earth based on the division of 360 into 12 equal sections, or Signs. We stay true to the insight of the Ancients and to their mysterious designs, their arcane patterns and their sacred templates.

The 12 sectors of the Zodiac are divided by 2 to give six Yang and six Yin signs:

Dynamic patterns based on the same divisions that create the Elements and Qualities of the 12 Signs are thought to generate different types of energy. The main ASPECTS as they are called in astrology are identified by the number by which they divide the circle. 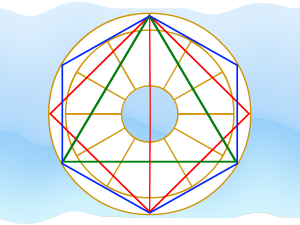 While there are other minor aspects which are based on more complex mathematical patterns, these are considered to carry the most influential energies:

OPPOSITION: 2 times 180 degrees = 360
TRINE: 3 times 120 degrees = 360
SQUARE: 4 times 90 degrees = 360
SEXTILE: 6 times 60 degrees = 360.
Perhaps the importance of being able to divide and sub-divide the zodiac to create definite, symmetrical patterns is what motivated the ancient astrologers to select only 12 constellations on which to base their investigations into the mysterious secrets of the skies surrounding their home planet.

Why the ancient astrologers selected only 12 of the constellations along the ecliptic is probably because they were seeking perfect symmetry of shape and form. It is likely that they were working with the secret symbolism of sacred geometry and numerical patterns of the 3/6/9/12 series as described earlier in this article.

And why they chose to feature Scorpio or Sagittarius rather than Ophiuchus as one of the 12 Signs is another question without a definite answer, although some scholars of astrology may put forward explanations. It could have been something to do with spiritual or mythical beliefs. It may even be that they deemed the characteristics intuitively assigned to Ophiuchus should not be included in the Zodiac or were to remain separate from it for a specific reason.

My own theory is that Ophiuchus (the serpent) represents what can happen when knowledge that is received by primitive minds falls into the wrong hands and becomes a weapon of mass destruction. We could argue that a Scorpion can be just as poisonous as a Snake, so how come Scorpio is honoured with a place in the zodiac whereas Ophiuchus is not? Probably because the symbolism associated with the 8th zodiac sign is ultimately positive. Astrology assigns the role of phoenix rising to Scorpio. It is the sign of purification, transformation, regeneration and rebirth.

I propose that human consciousness is not yet ready for the wisdom that the Serpent is waiting to give us. We are still refining and renewing ourselves, with the help of Scorpio. We are still learning, with the help of Sagittarius, to expand our levels of intelligence and awareness. We continue to complete our purification process and we continue to travel along our path to enlightenment.

Perhaps the Adam & Eve story holds the answer as to why we do not yet have 13 zodiac signs and why we will not be ready to receive the secrets of the Serpent until we have perfected our ability to choose good over evil, no matter how strong the temptation to do otherwise.

ASK ABOUT A PERSONAL READING

Stay tuned in & up to date

We use cookies on our website to give you the most relevant experience by remembering your preferences and repeat visits. By clicking “Accept All”, you consent to the use of ALL the cookies. However, you may visit "Cookie Settings" to provide a controlled consent.
Cookie SettingsAccept All
Manage consent

This website uses cookies to improve your experience while you navigate through the website. Out of these, the cookies that are categorized as necessary are stored on your browser as they are essential for the working of basic functionalities of the website. We also use third-party cookies that help us analyze and understand how you use this website. These cookies will be stored in your browser only with your consent. You also have the option to opt-out of these cookies. But opting out of some of these cookies may affect your browsing experience.
Necessary Always Enabled
Necessary cookies are absolutely essential for the website to function properly. These cookies ensure basic functionalities and security features of the website, anonymously.
Functional
Functional cookies help to perform certain functionalities like sharing the content of the website on social media platforms, collect feedbacks, and other third-party features.
Performance
Performance cookies are used to understand and analyze the key performance indexes of the website which helps in delivering a better user experience for the visitors.
Analytics
Analytical cookies are used to understand how visitors interact with the website. These cookies help provide information on metrics the number of visitors, bounce rate, traffic source, etc.
Advertisement
Advertisement cookies are used to provide visitors with relevant ads and marketing campaigns. These cookies track visitors across websites and collect information to provide customized ads.
Others
Other uncategorized cookies are those that are being analyzed and have not been classified into a category as yet.
SAVE & ACCEPT